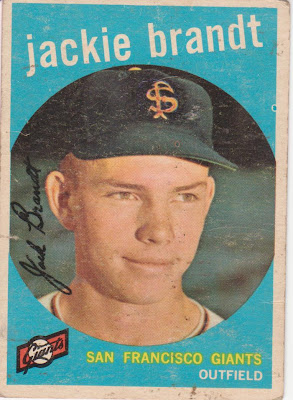 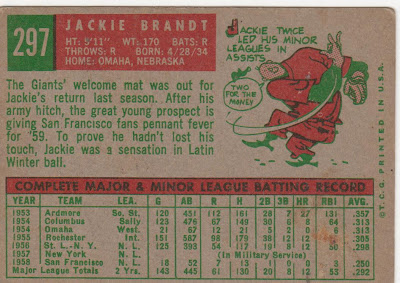 No, it's not a bad scan.... my Jackie Brandt card is pretty beat up. Surface scuffs, soft corners, blemishes, a small tear and a crease or two. To say nothing of Topps' horrible attempt to project the Giants 'SF' logo onto Brandt's cap.

I sure that this photo was taken during his time as a New York Giant. in 1956. Brandt spent time in the service, missing the '57 and most of the '58 seasons. In the meantime the Giants moved out to the West Coast. Topps airbrushed many of the New York Giants' caps in 1958, adding this rather strange 'SF' logo that only vaguely resembles the actual one. They ended up using this on Brandt's '59 card as shown. Fugley.

Brandt's career ran from his debut with the Cardinals in 1956 through a stint on the '67 Astros. He made stops along the way with the Giants as mentioned in New York and San Francisco in Baltimore and Philadelphia. His best seasons came as an Oriole from 1960 through '65.

He held down a regular outfield job with the pre-Frank Robinson O's and in fact was indirectly involved in Robby acquisition. He was dealt to the Phils in December of 1965 for Jack Baldschun who himself was part of the package the O's sent to the Reds 4 days later.