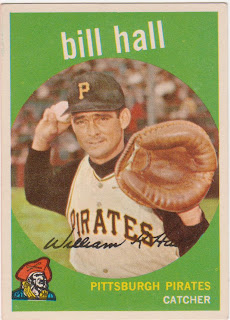 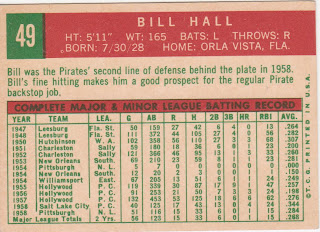 As one can see from the back of Bill Hall's card he was pretty much a career minor league catcher. He spent from 1947 through 1960 kicking around the Pirates organization collecting luggage tags and watching teammates advance up the ladder to better things at higher levels. He had three cups of coffee with the Bucs. Interestingly his one game stint in the bigs in 1956 isn't documented on his batting record on the back of the card. For the record he went 0 for three on April 27 against the Dodgers at Ebbets Field replacing Danny Kravitz behind the plate in the bottom of the 2nd.

Now you know.
Posted by Commishbob at 7:46 AM