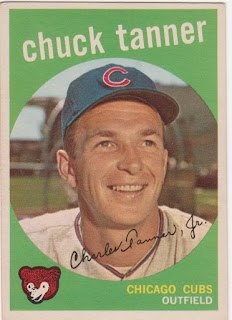 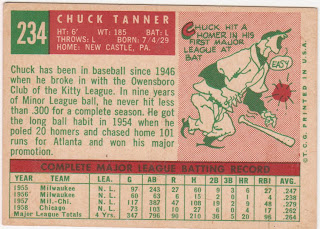 Chuck Tanner looks fresh faced and happy as he gazes into the future and sees himself having a much better career as a big league manager than he was having as a player. That's not entirely fair though. Chuck had a decent career as an outfielder, batting .261 over 8 seasons for four different teams, mostly the Braves and Cubs.Chuck, as noted on his cartoon, homered in his first at bat in the bigs pinch hitting for Warren Spahn on April 12, 1955. Supposedly that homer was on the first pitch he saw!

This truly f/g card is a favorite of mine. The green frame seems to work well with the Cubs colors and the field/stadium background. Ironically Tanner didn't appear as a Cub in 1959 as he was dealt to the Red Sox during Spring Training. He spent most of the year with the Minneapolis Millers alongside Carl Yastrzemski and soaking up the lessons of Miller skipper Gene Mauch. He was sold to the Indians in September before the Millers had moved on to lose to Havana in the 'Little World Series'.

After ending his career with the Angels in 1962 be managed in their farm system until taking over the White Sox helm in 1960. Chuck managed four different franchises through 1988. While he missed out on the 'Little WS' in '59 he more than made up for it by leading the Pirates to their 1979 World series championship over my Orioles. He managed his last game in the Braves dugout in 1988 and held front office jobs after that.

Tanner trivia... he was traded as a manager by the A's to Pittsburgh for Manny Sanguillen before the 1977 season!

Chuck Tanner died in February of this year.
Posted by Commishbob at 9:31 AM