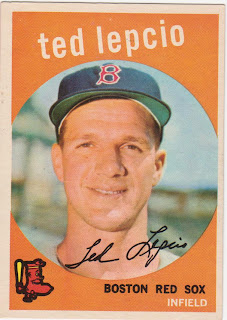 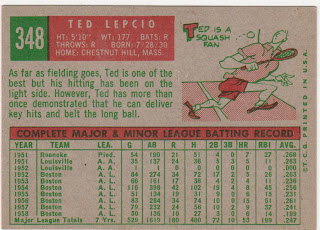 Ordinary card of an ordinary player, right? Not so fast. Check out the cartoon on the back of Ted Lepcio's card! "Ted is a squash fan." What the heck does that mean? Does he play squash or is he a 'fan', meaning he follows the sport like I follow football and hockey? I have to assume it means he played it.

Ted was a utility player for the Red Sox and spent the last couple of seasons of his career bouncing around with three other teams. He was dealt to the Tigers in May of 1959, just about the time this card was released.

Three facts I learned about Ted:
1) He attended Seton Hall University which is a school that's close to my old homestead and one I considered way back when. That was before I'd decided that I'd had enough parochial education.
2) He hit 15 homers in 1956, nine of those in an eighteen game stretch. And...
3) He was Jimmy Piersall's roommate with the Red Sox in 1962 when Piersall was having his ummm.... issues. I bet Ted had a few stories to tell!
Posted by Commishbob at 5:21 PM