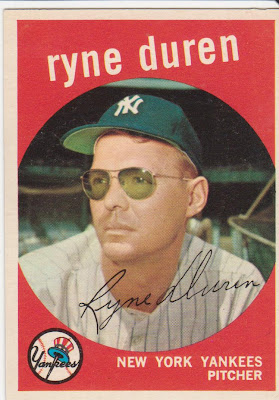 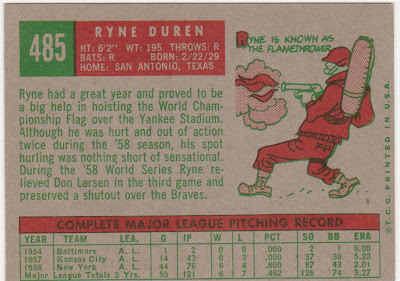 I remember seeing Ryne Duren pitch a time or two in Yankee Stadium and recall the buzz that accompanied his entry into a game. With his powerful arm and thick glasses he was Charlie Sheen's 'Wild Thing' from Major League in real life. And from all accounts that carried over to his off the field life a well.

Duren was famous for habit of firing his warm-up pitches into the backstop to 'impress' the upcoming hitter. It never hurt that he would squint in from the mound as if he had no clue as to where the plate was located. He was also known, but probably not publicly, as a hard living drunk who fit right in with the Mantle/Ford/Cerv/Bauer Yanks of the late 50's.

Duren was a St Louis Brown's signee in the late 40s and made his debut with a one game stint as a 1954 Oriole call up. Dealt to the Athletics and then the Yankees he established himself in the New York bullpen in 1958 and led the AL with 20 saves. He was runner-up in the Rookie of the Year balloting.

He pitched for the Yanks long enough to be in a couple of World Series' but not surprisingly he wore out his welcome and in 1961 began a journey that took him to five other clubs before he retired after the 1965 season. He finished with 57 career saves and likely at least that many hair-raising stories told about him.

Many of those stories can be found in his obit in the NY Daily News and in a terrific article written for the Marquette Law School faculty blog and is well worth the read. It mentions Duren's efforts on behalf of his African-American minor league teammates at a time that being a civil rights advocate was not a widely held trait.

After his playing days Duren became an advocate for alcohol abuse education and was honored by the Yanks for his determination in overcoming his alcoholism. He also authored a book, I Can See Clearly Now. Ryne Duren, for whom Ryne Sandberg was named, died earlier this year.

Check out the cartoon on the card's reverse featuring a G.I. armed flame-thrower. What a great card. Classic '59.
Posted by Commishbob at 8:16 AM