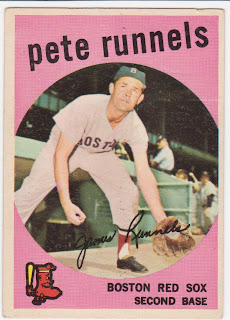 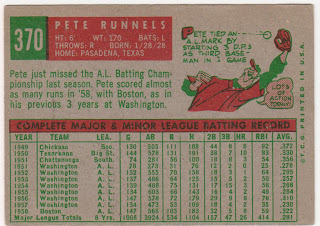 Not sure if it's still the case but I know Topps used to send a box of a players's cards to each player who appeared in a set. And knowing what I do of Ted Williams I'd have loved to been there when Pete Runnels opened his box of this card. Runnels 'making a play' with one foot in the dugout surrounded with a hot pink frame? Yikes.
But despite all that we press on and look at Pete Runnels for a bit. I had no idea that Runnels 1) was a Texas native; 2) attended Rice University in Houston; 3) lived in Pasadena Texas, close to me, prior to his death in 1991; 4) finished his career with the Astros (I was dimly aware he played for the Senators prior to his Red Sox days); and 5) had the fewest RBIs ever for a batting champ with his 35 in 1960.
In seven seasons in D.C. he hit .300 once but Runnels spent five season with the Sox and never hit lower than .314. He won the batting title in the AL twice and played on three AL All Star squads. He just missed another batting crown in 1958 when he lost out by 6 points to teammate Williams. He tied a record on August 20, 1960 when he had nine hits in a doubleheader.
Interestingly Runnels was coming off his second batting title when he was traded to the Astros for the 1963 season. By that time he had pretty much given away his fielders gloves and had become a first baseman full time. The Sox had picked up Dick Stuart in a trade from the Pirates six days prior to dealing Runnels in an effort (I presume) to gain pop at a power spot. They seemed to know what they were doing since Runnels numbers fell off in Houston and Stuart ended up leading the AL in RBIs in '63.
Posted by Commishbob at 7:22 AM