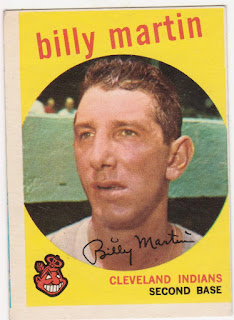 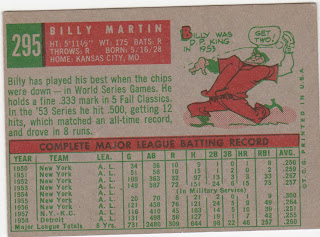 The Topps photographer didn't do Billy Martin any favors with this dugout shot.
Martin needs no introduction, and I really wouldn't know where to begin to recount either of his baseball careers. Scrappy as a player (on and off the field) he carried that same persona to his days as a manager for several American League clubs, most famously the Yankees.
Some Billy Martin facts (and opinions):


I'm not a big fan of the guy. But to give him his due I direct you to some places where you can read more about Billy Martin than I want to:
Wikipedia
An ESPN bio
An account of his Christmas Day 1989 death in a crash. Interesting quotes from Mickey Mantle in that post.
Baseball Reference Bullpen bio
This is one of my least favorite cards in the set (for multiple reasons) and I'm glad to be done with it.