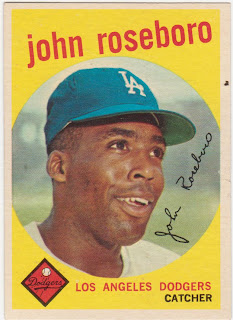 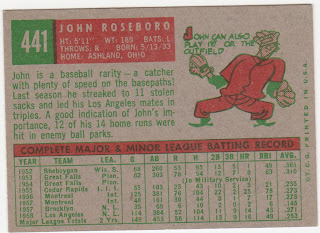 Time is of the essence these days with the school year cranking back up so I'm going to kind of 'shorthand' these posts sometimes. I may just hit up a few links for further info on the featured player and add a few comments of my own.

Today we see a smiling John Roseboro, successor to Roy Campanella behind the plate for the Dodgers and pretty fair player in his own right. Roseboro was a pretty athletic guy, not in the big burly mold of catchers of the era. He had some speed and the ability to play other positions.

Roseboro played in four World Series with the Dodgers and homered off Whitey Ford in Game One of the '63 Series. It was the only homer Ford allowed to a lefty that season. He won a pair of Gold Gloves and made four NL All Star squads.

He is best known for being hit with a bat by Giant's ace Juan Marichal in 1965 in a brawl that erupted after Marichal thought that Roseboro's tosses back to Sandy Koufax came too close. That's chronicled here. 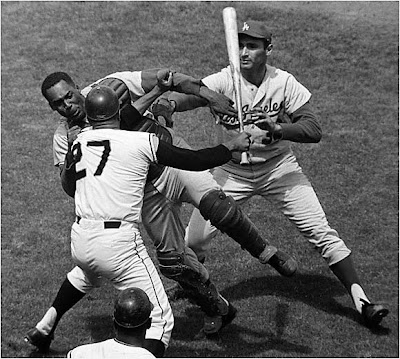 Posted by Commishbob at 6:46 PM