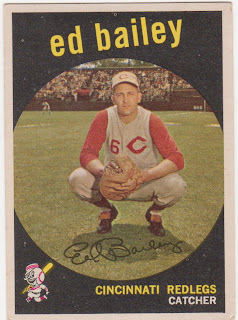 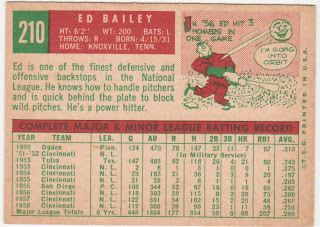 After a couple of previous trials and a military stint Ed Bailey was handed the bulk of the Reds' starting catching work in 1956 and responded with a fine season. He was leading the NL in hitting at the All Star break and earned the first of five selections to play in that game.
He ended up the '56 campaign with his best career numbers hitting .300 with 28 homers and 73 RBIs. While he never reached that plateau again he had a solid career in the National League. He started for the Reds until a 1961 early season trade sent him to San Francisco.
While that trade cost him a shot at a World Series with the Reds that season he was able to get to the Fall Classic with the 1962 Giants. He had only one hit in that Series versus New York but it was a homer. He hit it with two outs in the top of the ninth inning of Game Three off Bill Stafford and narrowed the Yanks' 3-0 lead in that game but  Jim Davenport's fly ball closed it out. Bailey remained with the Giants in a platoon catching role until he was traded to the Braves in 1964 and then back to the Giants in '65.
His second whirl in the Bay Area was brief as he was traded to the Cubs early in '65 and then on to the Angels in 1966 for a few token AL at bats. Bailey finished with a .256 career batting average and 155 homers.
Ed Bailey briefly played with his younger brother Jim Bailey in 1959 when Jim, a pitcher, was given a September call-up by the Reds. Jim Bailey got a start and a couple of relief appearances and behind the plate for all of them was Ed. The unusual circumstance was made more unusual because the National League had another family battery. The Sherry brothers were also a brother battery duo at that same time for the Dodgers.
Pretty good centering on this card and the black frame is cool as always. Looks like road uniform shot but I don't recognize the stadium view. I might try some research on it based on the wall and distance marker.
Posted by Commishbob at 9:09 AM