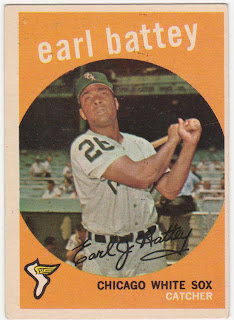 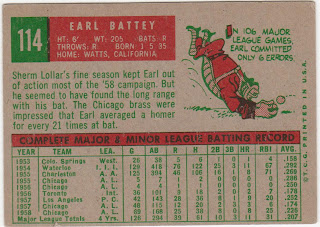 Earl Battey spent the first third of his career with the White Sox backing up Sherm Lollar and doing a lot of catching in the Sox system. A trade to Washington for the 1960 season kick started his late blooming career and  Battey became a standout receiver for the Senators and then the Twins.

Between '60 and his retirement following the '67 season Battey made four AL All Star squads, won three Gold Gloves (primarily for his terrific throwing arm) led all catchers in putouts and assists four times and finished in the top ten among MVP vote getters three times.

Not bad for a guy who seemed to have no future as a White Sox benchwarmer for half a decade. The really nice 1965 Twins tribute page Cool of the Evening, which I've referenced here before, has some interesting nuggets about Earl Battey... he spoke Spanish which he learned playing on semi pro clubs, was interested in a journalism career as a teen, had a radio show in D.C. while with the Senators and had thyroid issues which led to his 'roundish' stature.

Second straight orange-framed card with a Yankee Stadium background. But Earl Battey's signature is a whole lot nicer that Andy Carey's.
Posted by Commishbob at 8:47 AM