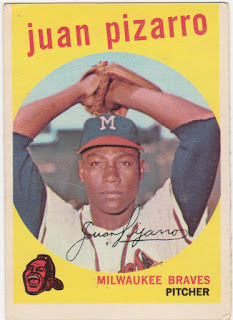 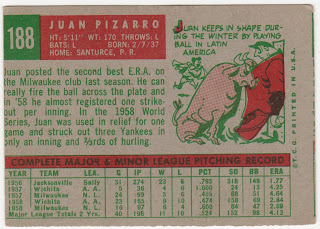 Juan Pizarro looks pretty glum in a lot of his card photos. Not sure why because that Braves uni looks good on him.

Pizarro, a native of Puerto Rico pitched for 18 big league seasons for seven different franchises. I guess what they say about lefties always having a job is true. I recall him as a Brave but he pitched in Chicago a lot more, six years with the White Sox and four with the Cubs.

His best years came in the early sixties as a fixture in the White Sox rotation, winning nearly half of his 131 big league victories between 1961 and 1964. His 19 wins in '64 were third best in the AL.

Pizarro pitched in the '57 and '58 World Series' for Milwaukee and the 1974 NLCS for Pittsburgh. He had no post-season decisions but, as the card notes, he whiffed three Yanks in 1 2/3 innings in the '58 Series..

Pizarro continued his career in the Mexican League after he left the majors and served as pitching coach for a Cubs' affiliate in the late '90s. God knows how many pitches Juan Pizarro threw from a baseball mound in his long life in the game.

Pretty standard card with the 'hands over my head in my wind-up' pose. I think almost all the Braves are pictured in a yellow frame. Which reminds me I need to do my frame color roundup one of these days.
Posted by Commishbob at 6:18 AM