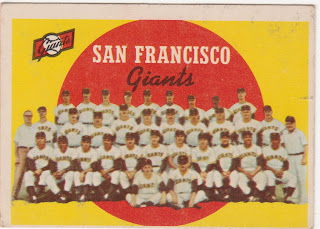 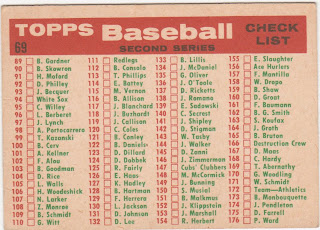 Bill Rigney's 1959 San Francisco Giants were a couple of years away from their World Series trip of 1962 but they were laying the groundwork for that season.
Centered around superstar Willie Mays they placed youngsters like Orlando Cepeda, Jose Pagan, Jim Davenport, Felipe Alou and Rookie of the Year Willie McCovey.
Sad Sam Jones led the club with 21 wins but over the next year or two the staff would be retooled to feature Juan Marichal and Billy O'Dell, Jack Sanford and Billy Pierce. That keyed a title run.
My version of the card is cleaner on the back than the front and is waaaay off center. That's OK by me. Growing up my best friend and his father were huge Giant fans so I saw a lot of the early 60s clubs and knew quite a bit about them. This card invokes some good memories.
Posted by Commishbob at 7:27 AM