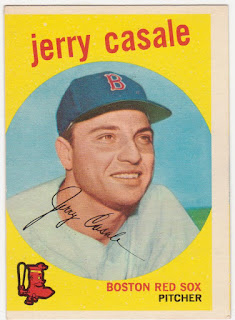 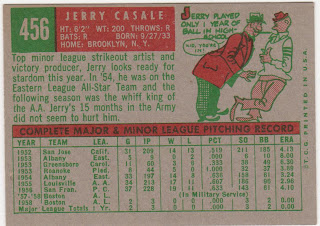 Jerry Casale is one of those guys from this set that I knew nothing about but who turned out to be an interesting character. Casale could be described as a 'one year wonder' in that he went 13-9 for the 1959 Red Sox but never won more than two games in any other season. In fact he won only only five other games over parts of five seasons. He pitched for both the Tigers and Angels in addition to the Sox. He retired after the 1963 season which he spent in the minors.

After retirement Casale, a Brooklyn native, opened Pino's, an Italian restaurant, in midtown Manhattan. One whole wall of the place displayed a mural of Fenway Park. Pino's became a haven for New York-based Red Sox fans. Casale held court there regaling customers with storied of his playing days and his friendship with Ted Williams.