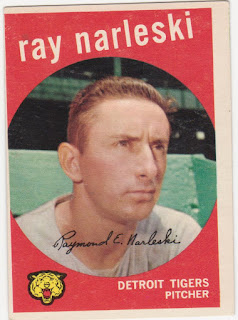 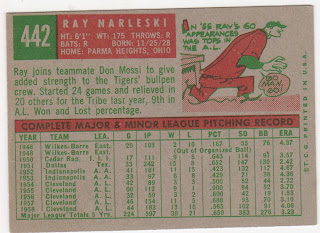 Ray Narleski looks none too pleased to having his picture taken. He's pictured on the card as a Tiger after having spent his previous five years in Cleveland and there he had a nice career in the Indian bullpen for the most part.

So, since this pic was taken in Yankee Stadium while Ray was on the Tribe I bet he's pissed because the camera guy asked him to pose hat-less. He was likely insulted by the insinuation that he's be somewhere else by the time his card went to press. Sorry, Ray. And welcome to Detroit.

Turns out he had a short stay in Motown, just for the '59 season. After a 14 loss season he was out of the game due to disc problems in his back.

While with the Indians he'd been part of a righty/lefty closer duo with Don Mossi and helped the Tribe win the '54 pennant.

He ended up making 39 starts out of 90 appearances in '57/'58. For his career Narleski was 43-33 with 58 saves. He made two All Star squads and led the AL in saves in 1955. He's the son of Red Sox infielder Bill Narsleski and after retirement worked as an auto body repairman.