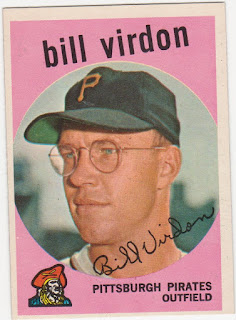 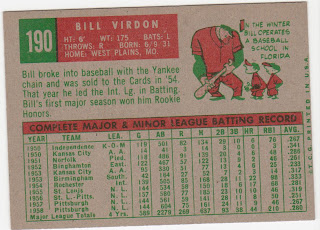 Bill Virdon always had that 'man's man' aura about him and even this pink framed '59 can't crush it. After being signed originally by the Yankees he began his career with a year plus with the Cards in '55/'56 and was dealt to the Pirates where he played until the end of the 1965 season (he made a token appearance in '68 while serving as a player/coach).

Virdon won the Rookie of the Year award in 1955 which makes it difficult to understand how the Cards could give up on him so quick in '56, even given a slow start. He never made an All Star squad (I'd have lost a bet on that fact) but he did win a Gold Glove in 1962.

In 1960 he was the batter whose grounder bad-hopped into Tony Kubek's throat and opened the flood gates for a Game Four Series win for the Bucs. He tells that story here.

After his playing days he managed for four different clubs, twice winning a division title and twice being named Manager of the Year. He continues to work as a consultant to the Pirates during spring training each year. All in all, a pretty good life in the game.

My copy has nice corners, bad centering and a loud pink frame. Sweet, right?
Posted by Commishbob at 7:37 AM