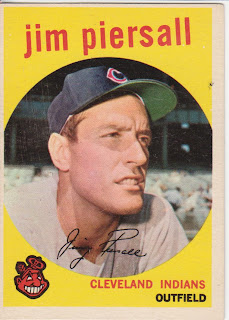 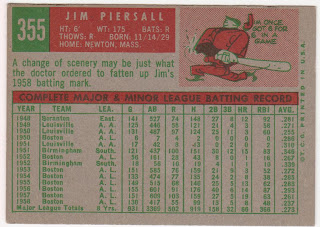 While it's not one of the more interesting cards in the set, the '59 Jimmy Piersall features one of the most interesting players, ever. Like Don Larsen of a few days back, Piersall was known mainly for a single facet of his career. In this case (no pun intended) it's his widely discussed reputation for bizarre and humorous behavior, both on the field and off.

Hard to know where to begin with this guy. First of all he was a pretty good baseball player through the decade of the '50s and into the '60s with both Boston and Cleveland. Never a real power threat (although he did break into double digit home numbers a number of times) Piersall was a two time AL All Star and won a pair of Gold Gloves for his work in centerfield. He hit a career best .322 with the Indians in 1961.

Piersall suffered from bipolar disorder which made pretty much every day an adventure for teammates, opponents, umps, fans, his managers and team front office types. It wasn't much of a party for the league president either. Early career demotions came from clubhouse fights, on-field antics and even (allegedly) a clubhouse spanking of a teammate's kid.

The litany of Piersall 'stunts' include being ejected for running back and forth in centerfield to distract Ted Williams at the plate, Jogging the bases backwards to celebrate his 100th homer (that one got him a ticket off the Mets' roster), spending time behind the Yankee Stadium monuments 'talking' to Babe Ruth, wearing a Beatles wig to home plate, and fighting with fans on the Yankee Stadium turf, not to mention numerous ejections and helmet and baseball throwing incidents.

He played out his career with the Senators, Mets and Angels retiring in 1967 to work in the Angels' front office and eventually become a Ranger and White Sox broadcaster, a job from which he was fired for his honest appraisal of lousy Sox teams. He authored two books along the way, Fear Strikes Out in 1955 and The Truth Hurts in 1988. The first became a rather famous movie staring Anthony Perkins. Piersall panned the flick.

Piersall is the subject of numerous 'fan sites'. I'll link to a couple for your further amusement.

And a few pics of Piersall at his 'best': 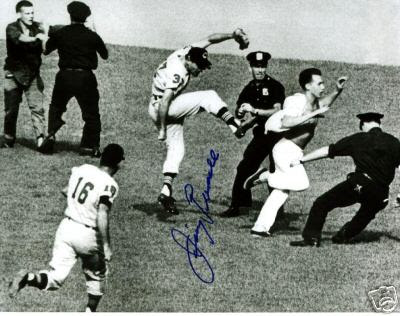 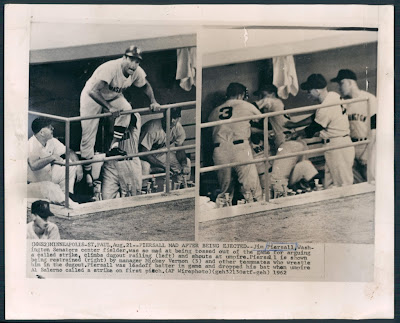 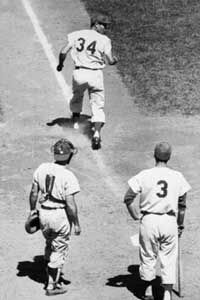 Is there any wonder the Piersall card I have is 'off center'?
Posted by Commishbob at 8:01 AM