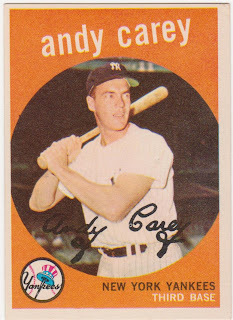 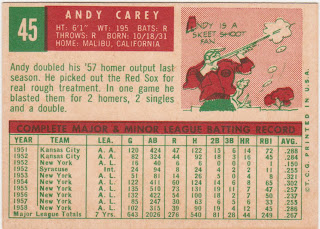 After signing with the Yankees in 1950 and a couple of trial runs, Andy Carey took the regular third base job in the Bronx in 1954. He held the job, more or less on a full-time basis until he was nudged aside by Hector Lopez in 1959.

Along the way he won a couple of World Series rings with the Yanks. In 1960 when the Yanks decided to move Carey along they sent him to the place where all old Yankees went to begin the downhill ride to retirement, Kansas City. Stops in Chicago with the White Sox and in L.A. with the Dodgers rounded out the Carey resume.

He had led the league in triples in 1955 but never really recaptured the magic of his first season as a Yankee when he hit .302 and had a career high 65 RBIs.

The card is in really nice condition and I always favor the white cardboard. Take a look at Carey's signature. Looks like he used a late 50's version of a Sharpie doesn't it?

Posted by Commishbob at 8:02 AM