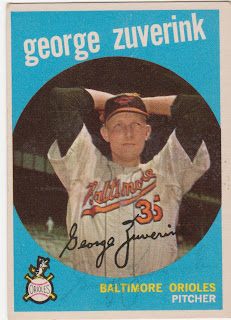 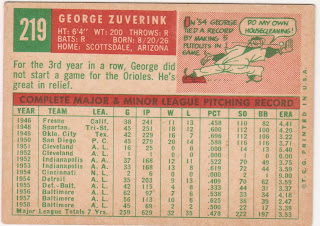 George Zuverink, a 21-year-old pitcher from Michigan, was signed by the Cardinals on the basis of a letter president Sam Breadon received from a scout who saw him hurl in the Philippines. Zuverink is a former semi-pro, standing six feet three inches. He will report to Houston of the Texas League.--The Sporting News February 28, 1946

As noted on the terrific Baseball In Wartime site, George Zuverink served at bases around the Pacific during WWII. His pitching on service clubs earned him a contract with the St. Louis Cardinals. But the Cards in those days had a very deep rich farm system and Zuverink ended up with the Indians, Reds and Tigers before he found himself in Baltimore in 1955.

In '56 and '57 Zuverink came into his own as an Oriole reliever and he led the AL in games pitched and games finished. In 1956 he led the league with 16 saves. His record those two seasons was a combined 17-12 with 25 saves.

In 1957, he and Oriole catcher Frank Zupo became the first battery in the history of baseball whose last names both began with "Z". Zuverink pitched for the O's through the 1959 season before shoulder ailments ended his career. He had an aborted stint in spring training in 1960 with San Francisco but didn't make the club and his career was over after pitching that year in the minors.

Zuverink sold insurance and umpired amateur games after retirement. He served as a fill-in ump during the umpire strike of 1979.

My copy is fairly nice with a dinged corner but nice bright colors. Ol' George poses in Yankee Stadium wearing the classic O's duds of the time. Oh, the memories.
Posted by Commishbob at 7:24 AM