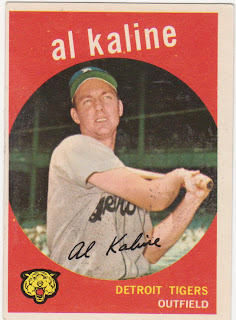 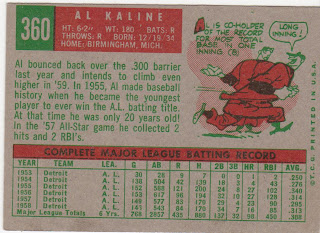 If it's possible for a Hall of Fame player to be unappreciated then I propose that Al Kaline is. I did a search and was very surprised by how few 'Al Kaline' related hits came back. Heck, MY posting of the Kaline All Star card in this set showed up at the bottom of the first page of a Google search. That's kind of sad.

Kaline is a Baltimore native (yea!!) who broke in with the '53 Tigers as mainly a defensive replacement for the second half of the year. 1954 saw him grab a fulltime job in the outfield of Briggs Stadium. But despite his finishing third in the R-O-Y balloting there isn't much in his numbers to indicate what was to come.

Before we look at any specifics, here's a quote from Kaline's Hall of Fame site page:

Al Kaline is part of a rare breed that we won't see many more of. Consistent, dignified, not sullied by controversy and revered for his career-long play for a single franchise. He spent many years after his playing days as a Tigers' broadcaster.

This looks like a Yankee Stadium shot from 1958. It appears Kaline is wearing the uni which Detroit broke out in '58 that featured a script front without the orange border. Either way, a great card of a favorite player.
Posted by Commishbob at 7:54 AM