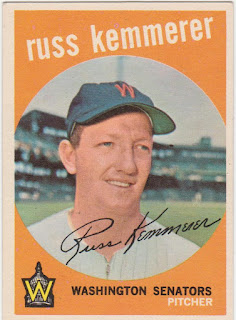 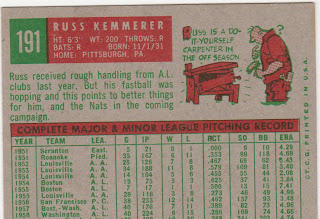 Russ Kemmerer played nine seasons for four different clubs and I don't remember anything about him. He was a Red Sox signee and pitched for the beginning in 1954 after a two sport college career at Pitt (baseball/basketball).

Kemmerer swapped jobs between starting and relieving for the BoSox and Senators through about 1960 when he moved to the White Sox' and then Houston bullpens full time. He was finished in he majors after 1963 and had a 43-59 record. Spent some time after that in the Houston minor league system.

I like any card that shows a player in a stadium other than Yankee Stadium of a spring training facility. This is probably Griffith Stadium due to Kemmerer wearing the Senators' pinstripes.
Posted by Commishbob at 9:58 AM