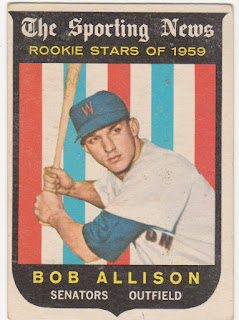 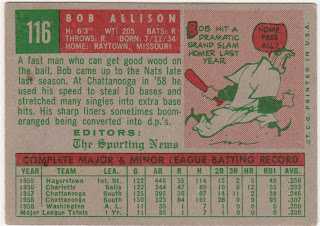 I'm not really sure what made Bob Allison a favorite of mine in the early 60's. I wasn't a Twins fan and Allison wasn't a Baltimore native. Yet for some reason I rooted for him pretty hard at Twins-Yankees games I saw in New York. And I continued to follow his career until he retired.

He played football at Kansas before being signed by the Senators. Allison spent his whole career with the Senators/Twins franchise. He captured the AL Rookie of the Year award in 1959 when he led the league in triples and slugged thirty homers.

He continued to hit for power as the years passed with double digit homers in all but one season through 1968, finishing in the top ten 8 times. Never much of a hitter for average Allison did well enough to make three All Star squads and led the AL in runs in 1963. He was also a feared base runner who possessed fairly good speed for a player with his size (6'4" 230+lbs) and power.

He teamed with Jimmie Hall and Tony Oliva to form a strong outfield for the '65 Twins club that went to the World Series. He made a memorable sliding catch in Game Two of that Series.

Bobby Allison died in 1995 from complications of a rare form of ataxia. The University of Minnesota ataxia research is supported by the Allison family's foundation.

Nice recap of his life and career is here.
Posted by Commishbob at 12:24 AM