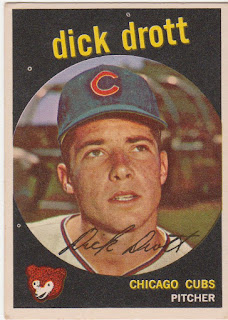 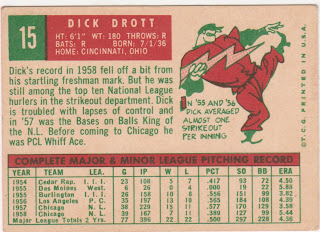 Dick Drott looks pensively skyward, wondering where his once promising career has gone. After a rookie season that saw the hard throwing strikeout specialist win 15 games for a Cubs team that won 62 total, Drott ran into arm miseries that ate into his 1958 effectiveness and cost him a huge chunk of 1959.

Drott re-emerged as a reliever for the Cubs in 1960/'61. With just two wins in three years he was made available to the Houston club in the '62 expansion draft and spent two years as a Colt 45. before retiring. He made an aborted comeback attempt with the White Sox in 1965 but didn't make their staff.


On April 27 of his rookie season, Drake was ejected from a game for borrowing a wheelchair from a crippled fan and wheeling fellow flake Moe Drabowsky to first base after Drabowsky was hit on the foot by a pitch.

Black frame, cute little circa '59 Cubbie head logo, cool cartoon... adds up to a nice card.
Posted by Commishbob at 8:14 AM