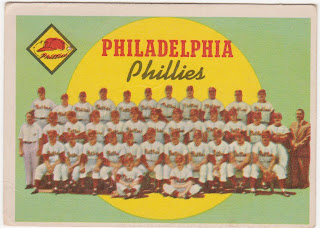 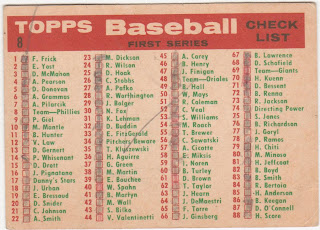 Don't know which side of this card is worse... the front with the light green/yellow combo or the back with the filled in boxes and stray marks.
The 1959 Phils were awful. They finished 23 back in last place, eight games back of the 7th place Cardinals. Sparky Anderson played 2nd and batted .218. Robin Roberts won 15 games but had the highest ERA among the regular starters. Gene Freese led the club in homers, Wally Post in RBIs and Carl Sawatski was the top average guy. Hmmmm.
Lucky for Phils fans those days are waaay in the past.