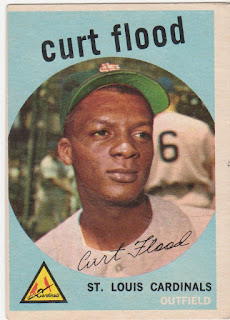 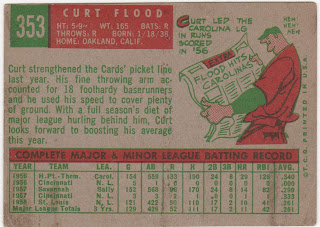 Editorial note: I'm back after a hiatus that was the result of blog burnout, fantasy football season and scanner problems. I plan to resume posting cards from my 1959 Topps collection on a regular basis but the daily postings are a thing of the past. Putting up a post every day became a problem at times. I will do my best to post several cards each week. The write-ups will vary from detailed to cursory depending on the card and my available time.  -Bob

This off-center, scuffed and blemished copy of Curt Flood's '59 card doesn't do his career justice. Mention his name to a baseball fan my age and most will think of his pioneering stance that challenged and forever changed baseball's established way of doing business. You can read about that aspect of Flood's legacy here at the Baseball Reliquary site in a short but well done article.

After coming up with the Reds in 1956 Flood spent 12 full seasons as an outstanding player for the St. Louis Cardinals ending with a trade to the Phillies in 1970 that sparked his crusade to overturn the reserve clause. Except for a brief tenure with the Senators in 1971 the sport was done with him.

Along the way Flood won 7 Gold Gloves as the Cardinals' centerfielder, made three All Star squads and accumulated MVP votes from '63 thru '68. A career .293 hitter, Flood won World Series rings with the Cards in '64 and '67, coming close again in 1968.