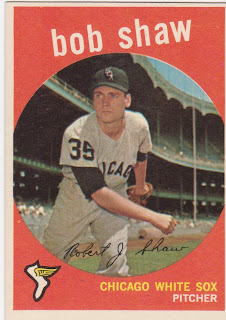 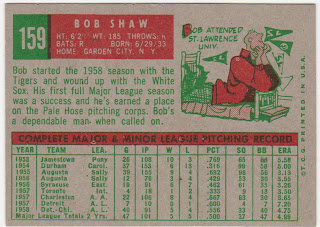 I'm consistently amazed at what I learn doing research for these posts. I recall Bob Shaw from his days with the Giants and never gave him much thought. But he had an interesting career and a few glorious moments in the sun for sure.

Shaw broke in with the Tigers in 1957 with a brief look and was dealt to the White Sox in 1958. It was there he came under the influence of Early Wynn who served as his tutor and role model. The lessons paid off as Shaw had a terrific '59 season winning 18 games and helped the Sox reach the World Series against the Dodgers. He finished third in the Cy Young voting.

Shaw pitched and lost Game Two of the Series 4-3 by allowing two homers to Charlie Neal. One of those was the shot that led to the well known picture of Al Smith's beer shower which was covered in Smith's card posting. Shaw returned to the mound in Game Five of the Series with the task of staving off his clubs elimination and facing Sandy Koufax. He was up to the task as he combined with Billy Pierce and Dick Donovan to down L.A. 1-0.

After a so-so season in 1960 (he was not happy with his salary offer from the Sox) and a slow start in 1961 Shaw was traded to the A's and again after the season to the Braves.

In 1962 Shaw won 15 games while reportedly learning the spitter from Lew Burdette. In '66 he was off to the Giants where he served both as a reliever and starter and had an excellent 1965 campaign. Rumor is that he taught the spitter to Gaylord Perry during their time on the Giants.

He was traded to the Mets in 1966 and finished with the Cubs in '67. He went on to become a pitching coach for the Brewers and coached and taught baseball in Florida after his playing days. He was also a successful businessman.

Shaw's career is chronicled in several places including this Chicago baseball site, a couple of articles in the Palm Beach newspaper and on SABR's site. The first of the two Palm Beach Post stories tells a nice story about Shaw meeting Sandy Koufax 40 years after their '59 Series game and how Koufax signed a picture of the two of them taken that day.

Bob Shaw was born in the Bronx so this card chronicles a homecoming for him. He can be seen chatting it up in the background of Jim Rivera's '59 card.
Posted by Commishbob at 7:55 AM