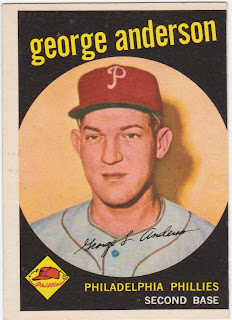 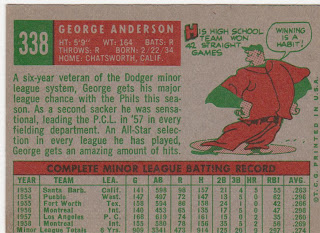 Yes, that's Sparky's rookie card. And no I can't explain why he already looked like he was in his mid 40s in 1958 when they probably took this shot. Or why all it needs is a number board around Sparky's neck to pass as a mug shot. Just be happy it's got that cool black frame and that Topps actually did a nice job airbrushing that cap.
1959 was George "Sparky" Anderson's only season in the majors. He played six seasons in the minors, escaped the Dodgers talent logjam by being traded to Philadelphia, made the Phils roster and was an every day starter at second base for one year. He then disappeared back to the minors for 4 more years. He hit .218 without a homer and drove in 34 in that one big league year.
But as his playing days ended in Toronto he traded in his glove for a lineup card. At the age of 30 he began what would become one of the most celebrated managerial careers in the history of the game. Sparky managed several seasons in the minors, coached in the bigs and in 1970 took over the helm of the Reds.
26 years in Cincinnati and then Detroit, 2194 wins, five pennants and three World Series titles later he retired to await his election to the Hall of Fame. Sparky was the first manager to win a World Series for both a National League and American League team.
I was lucky enough to have a conversation or two with Sparky Anderson at the baseball Winter Meetings in Houston back in 1981. I remember two things: first, that Sparky was kind enough to ignore the fact that my buddy and I were not really journalists but a couple of college dipshits that had wrangled credentials with our sheer charm, and second, that he sat and chatted with us in the press room about Dave Concepcion's rehab, the 1970 World Series and anything else I could think of to keep the conversation going.
Hall of Famer indeed.
Posted by Commishbob at 9:08 AM