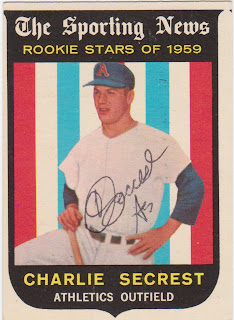 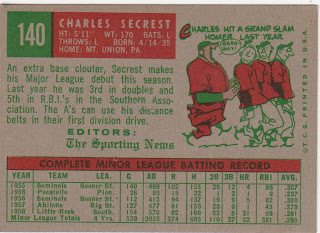 Sometimes this blogging stuff just bowls me over. I sat down on a Friday evening earlier this month to do this entry on Charlie Secrest's '59 Rookie Stars card. I googled his name and didn't get much. When I searched for info on him I came up just about as clean as his the blank jersey shown on his Rookie Stars card.

I found his entries on Baseball Reference and SABR, both of which had his minor league numbers, vitals and not much else (nothing else in fact). His SABR bio consists of  "Charles Secrest was a professional player." That's it. Thanks.

But I found two additional items, both of them were references to Secrest in Baseball Digest issues from early in 1959. One was in the April issue and consisted on a single line in a team by team  prospects article that mentions Secrest might "edge into the outfield" for the Kansas City A's. 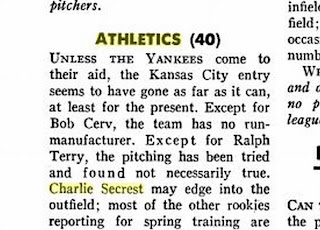 The other one was better. It's from the March '59 issue and is a small bio and prospectus of Charles Secrest: 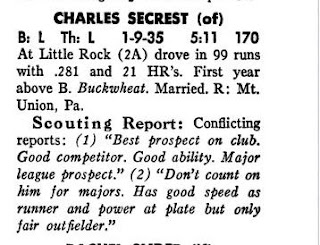 Secrest never made it to the majors, at least not long enough to get into a game. So it looks like the scout that wrote Part 2 was correct. But something struck me. The little paragraph listed his nickname, "Buckwheat".  So it got me to thinking, and I googled 'Buckwheat Secrest'. Bingo!! I found a great feature story written about Secrest that appeared in his hometown newspaper in 1987. And another entry in the same paper from 1958 (about halfway down the left column) that mentions his participation in an upcoming major league All Star exhibition in the area. 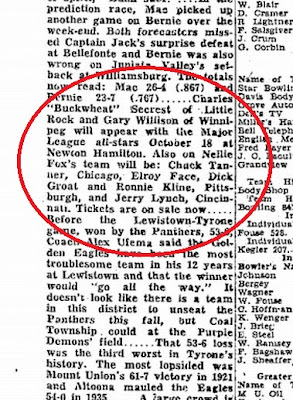 Secrest began as an Orioles prospect playing in Ada, Oklahoma in 1954. Seems that he sure had the tools to make it to the majors but, according to Secrest in that article, a series of missed communications, bad breaks and sheer stubbornness kept him from receiving his due. It's a pretty fun article if you care to read it. He moved to the A's chain in '55 and worked his way up the ladder to the AAA level before hanging up his glove following the 1963 season.

As his cardback says Secrest was a prospect with some power. He was coming off a 21 homer season in 1958 at AA Little Rock.

With a bit more research I found that Charlie Secrest is alive and living in Lewistown, Pa., which happens to be where my Mom was born and raised and where I spent a lot of summer nights hanging with my cousins and their friends back in the early 60's. Turns out Secrest lives less than two miles from my Mom's youngest sister. Imagine that.

I sent Secrest this card and a note asking him a couple of questions, principally how he got his nickname. I received my autographed card back a week later. I like how he added "A's" under his name. I bet he still holds a grudge against the Orioles! But while Charlie hadn't answered my questions I was glad to get an autograph from a guy whom I'd learned much about anyway and with whom I felt a connection. Here's hoping Charlie is in good health.
Posted by Commishbob at 7:36 AM