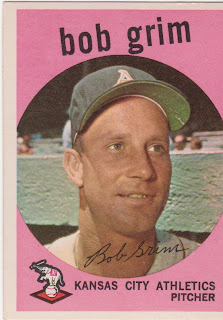 Bob Grim made quite a splash in 1954 as he became the first rookie Yankee hurler to win 20 games since 1910. He won seven of those as a receiver. His season earned him Rookie of the Year status. And while he had some decent seasons after that and his career numbers (61-41 3.61) look fine, Grim was never able to recapture the magic of his debut year.
He was shuttled back and forth between a starting job and the bullpen for the Yanks. Along the way he had a league leading 19 saves in New York in 1957 to go with 12 wins and an All Star selection. Arm problems (and likely his poor World Series work in '55 and '57) led to his being traded to Kansas City in 1958. Again he moved back and forth between roles while in KC and ended up moving between three different clubs in 1969 without much success.
He spent 1961 in the minors and had an aborted comeback attempt with the A's in early 1962 before leaving the majors for good.
As luck would have it the nice corners on this card are mitigated by the fact that it's seriously mis-cut. I tend to waver in my opinion of the pink frames on these cards. I think it has to do with my mood the day I scan them. This one sucks. ;-)
Posted by Commishbob at 7:41 AM