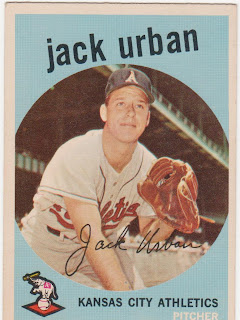 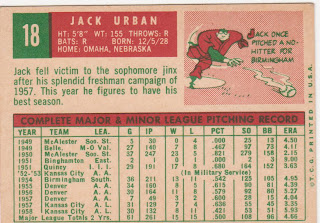 "Hi, Jack Urban? ... George Weiss here. Look Jack, I've got some bad news and some good news. First the bad news. We've traded you to the Athletics. Jack? Jack? Whats that? Oh... the good news? Well, as you know we trade damn near EVERYBODY to the A's so your roommate will be somebody you've already met. And look, you know how it goes. If you actually turn out to be worth a damn we'll just call and get you back? Nice, huh? Yeah, it's like being with our farm team but you get a major league salary. See ya around, pal."
The really bad news for Jack Urban was that after a couple of years with the A's and a few games with the Cardinals the Yanks DID get him back but never brought him up. He ended up with a 15-15 record splitting his time between the starting rotation and the bullpen.
Two cool things:
1) Jack Urban and I (and Cliff Floyd among others) share a December 5th birthday.
2) This is one of the best 59's I own. The scan doesn't do it justice.
Posted by Commishbob at 6:51 AM