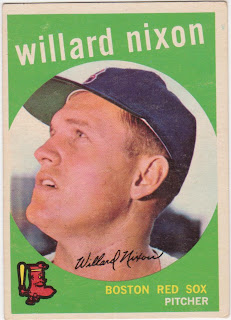 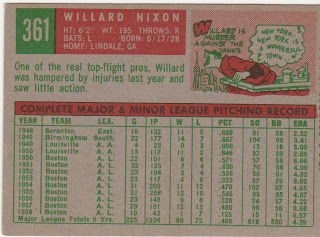 Willard Nixon falls into the "Who's he?" group of players in the '59 set. Or at least he does for me. Even some of the more obscure guys have cards I remember from when I was a kid. Dutch Dotterer for example. But I had no idea about Willard Nixon.
But then again one of the reasons I'm doing this is to educate myself about players from an era of the game that's special to me.
Willard Nixon pitched for Boston from 1950 through 1958. So he was out of the majors by the time this card showed up.  He spent the first four years of his tenure with the Red Sox more often as not as a starter but mixing in quite a few relief appearances. In 1954 he moved into the regular rotation. He spent four years there, hovering around the .500 mark for some Sox clubs that finished in the first division but never threatened for a title.
He struggled with shoulder problems beginning in 1957 and by the end of 1959, after a year in the minors, he'd retired. He had won a reputation as a 'Yankee Killer' for his mastery over the dominant team of the era winning six straight over the Yanks in '54/55. He was also an accomplished hitter who finished with a .242 career average and hit .293 in 1957.
He led an interesting post playing career life working as, among other things, a scout and as chief of police in his Georgia hometown. He's a member of the Georgia Sports Hall of Fame.
Not sure why but from time to time Topps liked to throw in one of these 'gazing skyward' profile shots. This is the second one I've featured in three days. I guess the photographer thought he was being artistic or they were sick of the "posed in front of the Yankee Stadium third base side grandstand" shots. Just looks dopey to me. But the card itself isn't in bad shape at all.
Posted by Commishbob at 7:37 AM