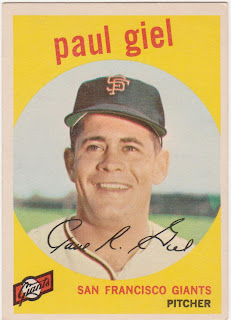 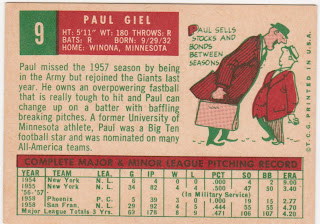 Live and learn. When I pulled this card for scanning I figured Paul Giel would be a short quick entry. I mean other than the fact that this is among the nicest cards in my '59 set what would there be to say?
Well, I'll tell you. Paul Giel was a college football star at Minnesota. He was twice named the Big Ten MVP as Gophers' quarterback and was also a two time All American. He was second in the Heisman voting his senior year (1953, in the closest vote ever) and he was elected to the College Football Hall of Fame. He also played baseball at Minnesota and had his uniform retired in 2003. He served as their Athletic Director for many years. The UM website has a nice summary of his accomplishments there.
When he came out of college the New York (baseball) Giants offered him a big bonus, more than he would have made in the NFL or the CFL which also pursued him. As a 'bonus baby' he was required to remain on the Giants roster for a couple of seasons seeing little action in '54 but pitching in 34 games in 1955. After an Army stint Giel returned to the Giants for the '58 season but was traded to Pittsburgh for '59 and on to the Twins in 1960. A 1961 trade to the A's brought a brief stay in KC and he was sent back to the Twins as a 'player to be named later', IOW he was traded for himself. He quickly retired and became a color commentator on Minnesota Vikings radio broadcasts from 1962 to 1969 before taking the AD job for the Gophers.
In 6 major league seasons (he never pitched in the minors) he won eleven and lost nine. But there was sure a lot more to Paul Giel than that!
Posted by Commishbob at 8:33 AM