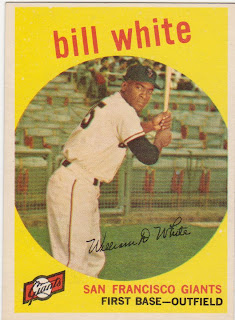 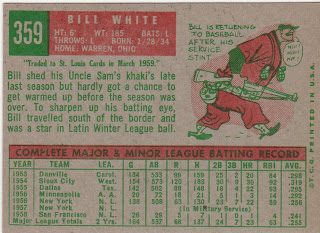 Hard to say when Bill White accomplished more, as a player or after he retired. He did pretty darn well for himself both ways.
White (every time I call him 'White' I think of Phil Rizzuto) debuted with the New York Giants in 1956, and did so with style as he homered in his first major league at bat. He stepped right into the Giants first base job but answered Uncle Sam's call and missed 1957 and most of '58. He was traded to the Cardinals prior to the 1959 season (see the little note on the back of his '59 card).
In St. Louis for the next seven years White was steady and productive with seven straight double digit homer seasons, several years of 100+ RBIs and a .300+ average.
He continued that production after being dealt to the Phils for the 1966 season. Along the way he'd won 7 straight Gold Gloves for his fielding and made five All Star teams. His production slid in his final two years in Philly and he ended his playing days with a season of pinch hitting back in St. Louis.
White wasn't idle long. He'd been dabbling in broadcasting while in St. Louis and Philadelphia and in 1971 used that experience to land the job in the Yankees' broadcast booth alongside Rizzuto and others. He worked for the Yanks through 1988 and made the famous 'Bucky Dent' call in October of 1978.
Bill moved to the executive side of the game. From 1989 to 1994, White served as president of the National League. Just in the past few months White released his autobiography entitled Uppity: My Untold Story About the Games People Play. That dovetails nicely with the recent book review posts.
NPR recently had an informative bio of Bill White which includes an excerpt of his book.
The Bill White '59 Topps kind of grabs me. It has him in a simple batting stance pose but there are not all that many like it in the set. The yellow and red of the card works with the Giants logo and also with the Polo Grounds seating behind him. Seeing that White had spent nearly two years in the military it's easy to figure that this was a shot from 1956. If you look really (really, really) close you can make out the sadly fake SF logo that Topps applied to his cap. It's based on the old San Francisco Seals logo and we saw it previously on Jackie Brandt's card.. Topps was guessing what the Giants would wear when they moved west. I guess they could have fixed it seeing that the Giants had at this point been the 'San Francisco' Giants for a season. "But, hey, the kids will never notice, right boss?"
Posted by Commishbob at 8:31 AM