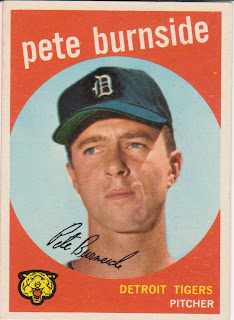 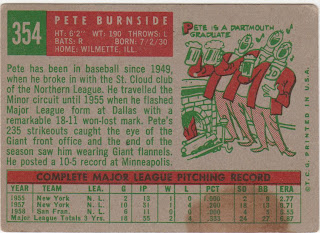 Pete Burnside, with the Dartmouth education and the unfortunately stained card, began his major league career with the New York Giants in 1955. He's signed with them in 1949 but had kicked around the minors and had served in the Korean War. According to Dartmouth's baseball page he never actually played ball there.
Burnside didn't establish himself in the bigs until he was acquired by the Tigers after the 1958 season and spent a year as a regular contributor out of their bullpen. He spent 1960 splitting his time between starting and relieving and continued that duel role for two years in DC after being taken in the expansion draft by the Senators.
He was traded to the Orioles in December of 1962 but early in May of '63 was released by the O's. Resigned that month by the Nats he finished his career that season working out of the pen.
He pitched for the Hanshin Tigers of the Japanese Central League for a couple of seasons before hanging up his glove for good.
His major league numbers reflect his modest success with an overall 19-36 mark and an ERA of 4.81. He gave up three of Roger Maris' 61 homers in 1961, so that's something, right?
Burnside's card has that damn stain. It was part of the crappy lot I've mentioned that had several stained cards. I don't want a collection of expensive pristine specimens but I don't want ugly stains on my cards either. I have a better copy coming   Better copy arrived, and shown at the top.
. 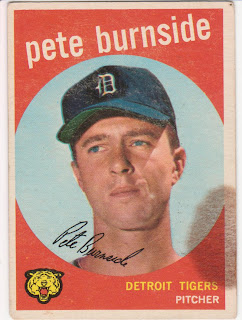 Posted by Commishbob at 8:58 AM