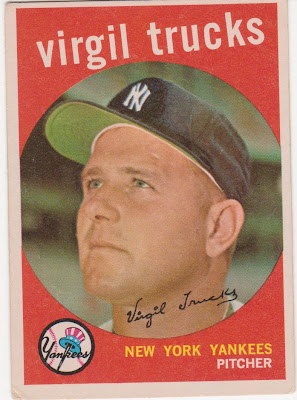 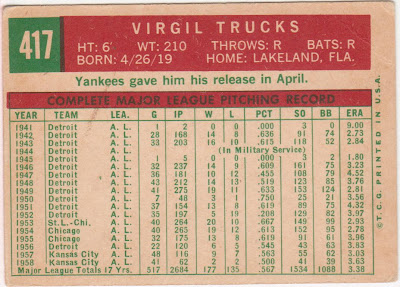 Wow, look at the stats on the back of Virgil Trucks' card. They so back to 1941 and leave just enough room for the info block and a line reflecting the release of the 40 year old vet by the Yankees that spring.

Ol' Fire's career began in 1938 in the minors and he debuts with the '41 Tigers. Through the next 14 seasons (with a military service stint along the way) he won the majority of his 177 career wins as a starter for Detroit, the Browns and White Sox. Moving to the A's in '57 he finished his career in the bullpen for a couple of seasons. His stint with the Yanks in 1958 was his final whirl around the bigs for this American League 'lifer'.

Despite 17 seasons in the majors he only made one trip to the World Series, that with the winning 1945 Tigers. He got a special pass to pitch in the postseason despite not having been on the roster on the usual September 1 cut off date. Trucks had been serving his country in the Marines most of that year. He won Game Two with a nifty seven hitter.

Trucks is one of only five men to pitch two no-hitters in the same season. He pulled that off in 1952 with near identical 1-0 wins over the Senators on May 15 and the Yankees on August 25. He made 29 starts in 1952 and only won five games but TWO of them were the no-hitters. How amazing is that?

Trucks is pictured here in a Yankees' cap but it's a pretty bad airbrush job. My card is rounded off and miscut but I have a strange and unexplained affinity for red framed Yankee cards. So it's pretty fine to me.

Here's an interesting (sort of) side note. Trucks' 1958 stat line doesn't indicate that he split the season between  the A's and Yanks. the numbers are complete but they 'credit' them to the Athletics. Maybe Topps  figured that at that point they were bound to run out of space or ink or both.

Posted by Commishbob at 6:14 AM