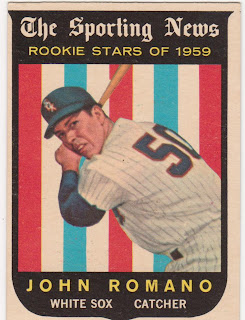 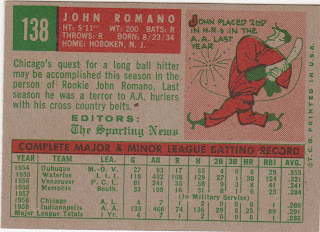 Time to take a break from summer book suggestions and concentrate on the cards again. I'll do one more book related post soon with a whole list of baseball reading that I left out of the previous posts for one reason or another. Meanwhile I hope you are enjoying something interesting to read.
After a 1958 cup'o'coffee with Chicago John Romano found himself playing in a pennant race and ultimately a World Series for the 1959 Go Go White Sox. He hit .294 and slugged five homers in 53 games backing up Sherm Lollar that year. He even got an at bat as a pinch hitter in Game Six of that Series. Heady stuff for a rookie out of Hoboken N.J.
That December he was dealt to the Indians and went on to his best years in the majors. In five seasons with the Tribe he made a couple of All Star games and hit double digit homers each season.
Traded back to the White Sox for the 1965 season he wound down his career as their (mostly) full time backstop. For more about the trade that sent him back to the Sox, one that bugged him quite a bit, see this thorough and entertaining bio.
Romano joined the Cardinals for their 1967 championship season. He only made a couple of appearances after July totaling four at bats and didn't get into the Series but I have to assume he got a ring. He retired after that season.
My Romano card isn't seriously miscut. It's seriously mis-scanned. Topps chose to use a colorized pic of Romano wearing a #50 jersey. According to his Baseball Reference page he never wore that for the Sox so I'm guessing it was a spring training shot.
Posted by Commishbob at 7:12 AM