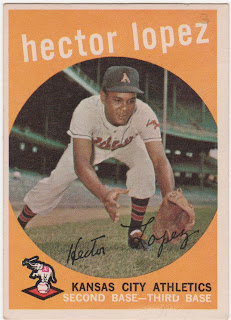 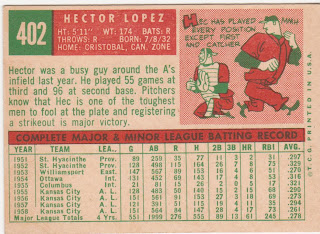 The very first time my Dad took me to a baseball game was at Yankee Stadium in either 1959 or (more likely since I seem to remember Minnie Minoso playing) 1960. I do know it was a doubleheader against the White Sox. And I know my Dad bought me about four hot dogs and an equal number of Cokes. I know because he always claimed it was six but I know that was bullsh*t (or not). Back then vendors carried big old metal warming boxes through the stands and slapped the dogs into buns encased in a napkin and added Gulden's mustard and/or sauerkraut. They passed from hand to hand if you weren't lucky enough to be near the aisle. The Cokes came in waxed paper cups that had a heat-sealed cello cover on top. And little or no remaining ice. I can still taste and smell all that stuff. My Dad matched me Coke for Coke (though not hot dog for hot dog).
I'm reminded of this because on his way back to the seats in the upper deck behind home plate my old man emerged from the ramp to the seating area as a foul ball clanged off the railing just over his head. He just barely avoided the flying Coca Cola launched by another fan in pursuit of that ball. Why is this relevant today? Because it was Hector Lopez who hit that foul ball. I remember because Hector Lopez became one of my Dad's favorite players for no explainable reason that I recall.
Hector Lopez, a black Panamanian and my Dad, a second generation German/Portuguese Brooklyn-ite had not a whole lot in common. But as a fan there are attractions that just can't be explained, you know? This was one of them. If Lopez were to look up and to his right from this card pose he would see the Yankee Stadium seats my Dad and I occupied for so many games in the '60s.
He called Lopez "Hector's Pup". "Here comes Hector's Pup" he'd say when Lopez entered the batters box. I know that 'Since Hector was a pup' (or variations of that) refers to something very old or that happened a long time ago, but Hector Lopez was no older than most mid-career ballplayers when he played for the Yanks. I think my Dad just liked saying it, and that's good enough for me.
Lopez came up with the A's in 1955 and was an everyday infielder for them until May of 1959 when he hopped on the Kansas City to New York shuttle. The Yanks decided they needed a fourth outfielder and they looked to their top farm club, the Athletics. 'Lucky' Hector got to play in five straight World Series' between '60 and '64. He got a ring for winning two of them and had a big Series in '61 with a Game Five homer and seven RBIs. He was released after the 1966 season and stayed in the game through coaching and managing. Through his career he was known as a tough out and the worst outfielder in the game.
He went on to manage at the Triple A level for the Senators' in Buffalo becoming the first black man to do so.  He is still widely revered in his native Panama and he managed the WBC Panama club in 2009.
My Dad passed away on New Years Day 2010. I really appreciate everything he gave me and sacrificed so that our family could achieve what we have. If your father is around, let him know how much you've gotten from him. Do it today and everyday in your thoughts and actions. He won't be around forever. If you are a dad, kick back and enjoy your day. I plan to.
Happy Father's Day!!!
Posted by Commishbob at 7:35 AM