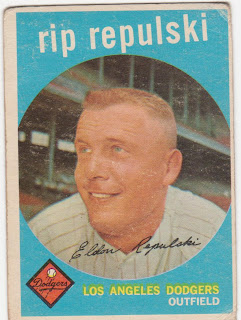 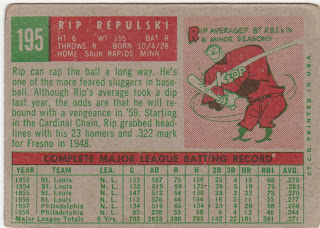 Eldon John "Rip" Repulski spent seven years in the St. Louis Cardinals' talent rich chain before he made the big club in 1953. He had a rewarding rookie season belting 15 homers and hitting .275. It earned him forth place in that years Rookie of the Year balloting. His overall numbers improved in his next two seasons before he regressed in 1956 despite an All Star Game selection.
He was dealt to the Phils and had somewhat of a bounceback season in '57 but regressed again the following season and a trade to the Dodgers (as he's shown on his card here) marked the beginning of the end of his career. After a trade he spent most of the 1960 season with the Red Sox and Boston released him in mid year of 1961.
As he did in his good rookie year in St. Louis, Rip introduced himself to a new set of fans when he pinch hit a grand slam in his first American League at bat in Fenway. That May 10 shot led to a Bosox win in a wild game.
My Rip Repulski (thats such a cool name) is at the lower end on my set condition wise. I'm 99% sure that's the Polo Grounds in the background as Rip poses hatless in his Phils uni. His facsimile signature is 'Eldon Ripulski'. Topps must have cut it off his Topps contract or a check he wrote. I'd bet he never signed an autograph like that.
Below is the Sports Illustrated Spring Training issue cover from March of 1956. It shows the Cards' five outfielders in a typical spring training shot. That's Rip in the middle flanked on the left by
Bill Virdon and Harry Elliott with Wally Moon and Stan Musial to the right. 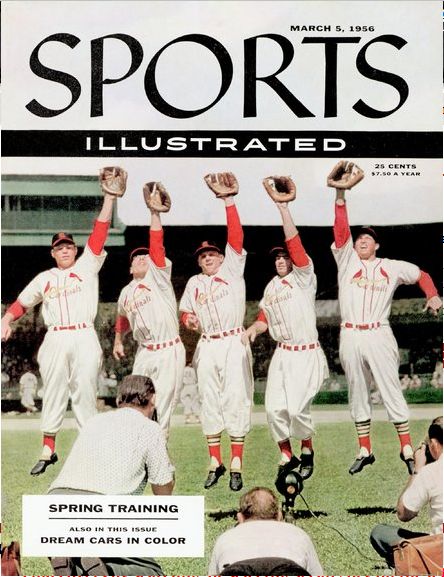 Posted by Commishbob at 7:52 AM