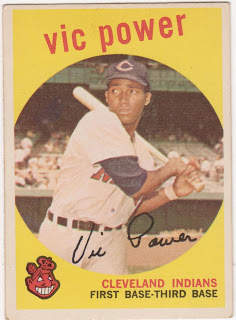 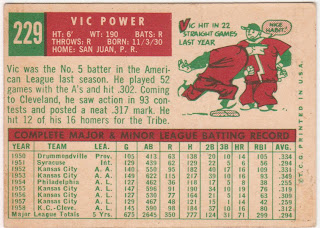 Yup, 'Vic Power' is one cool name. But his real name is Victor Pellot Pove and there are several stories as to how he came to use 'Power'. All of the stories involve French-Canadian fans from Power's days in minor league ball and all revolve around some cross language misuse of one of his real names. Whatever.
Power was originally signed by the Yankees in 1949 but was dealt to the Philadelphia Athletics prior to the '54 season and it was with the A's that he made his debut that year. He had a couple of pretty solid years in '55 and '56, batting over .300 and a combined 30+ homers but his average slipped 50 points in 1957 and early in '58 he was moved along to the Indians.
Three more solid years in Cleveland followed and then he was traded to the Twins. In 1964 power had the distinction of being involved in two three way trades. In June he went from the Twins to the Angels and in September he landed with the Phils to finish out the last month of the season. the Angels bought him back from the Phils that winter (sheesh) and he played out his career's final season there with the Halos.
Along the way Power compiled a career .284 average to go with his 126 homers. He made four All Star squads and got MVP votes (not a lot, but some) nearly every year.
But what Power did best, what I remember him for, is his magical skills at first base. He played it 'one handed' which, at least according to my Dad, was wrong. But that never stopped me, as a young first baseman, from trying to copy him. Hey, he won 7 Gold gloves. His 'floating head shot' was in that Sporting News Gold Glove composite picture every winter. He was just damn cool.
Kinda weird stuff I just noticed: Power led the American League in the following categories.... in triples in 1958, in being caught stealing in 1959, in sacrifice flies in 1961, and in sacrifice hits in 1963.
Power is an interesting guy and there's a very nice bio on the Philadelphia Athletics history page.
My copy of this card is about average for what I've collected. Interesting that Topps listed Power as 1b/3b. I guess that's because he played about the same number of games at both spots in '58. But he never really played third much after that.
Posted by Commishbob at 8:56 AM