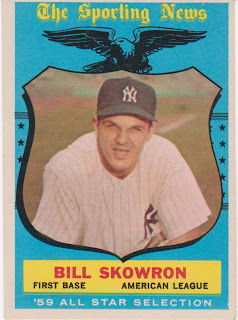 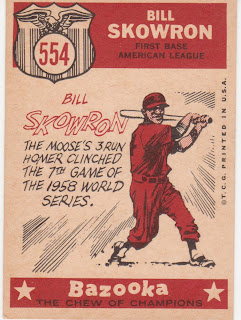 I kept looking at Moose Skowron's cards and and photos and thinking "he looks like some actor" but I just couldn't place it (I'm not much of a current movie guy). Then I was googling links for Moose and came across this. My friend Kevin had already nailed it! It's the guy from the Talladega Nights movie!

Anyway, Skowron was coming off one of the highlights of his career, a top of the eighth three run homer that broke open Game 7 of the 1958 World Series. It was sweet revenge for Moose and the Yanks as they reversed the outcome of the '57 Series in which they lost to the Braves in seven.
Moose was one of my Dad's favorites when we were going to so many Yankee games back then. He got a big kick out of the "Mooooose!" calls when he came to bat.
Lots more on Moose Skowron when his regular card comes up for a post.
Posted by Commishbob at 8:38 AM