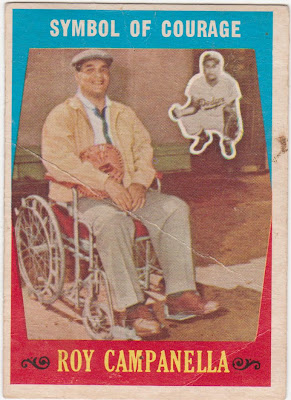 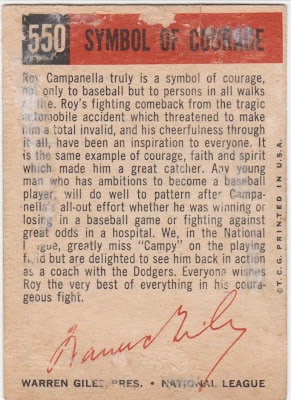 I'd think that anyone interested enough in late 50's baseball to be checking out this blog would be aware of the Roy Campanella story. Campy, star catcher for the Brooklyn Dodgers during their 'Boys of Summer' days of 1948 through 1957, was seriously injured in an auto accident on Long Island in January, 1958.

Campanella (like me, one half Italian-American!!!) is one of those unique figures who accomplished much on the ball field but maybe more off it. His game accomplishments are pretty staggering in themselves.... 8 All Star game appearances, three (3!!) NL MVP awards, anchoring five NL championship clubs and a World Series winner. His 1953 numbers (41 homers, 142 RBIs and a .312 average) represent one of the best seasons ever by a catcher. That's to say nothing of his Mexican League and Negro League stats.

But off the field, both before and after his accident, his actions show the depth of his greatness. Campy was the first black American to manage white professional players when he took over for the ejected Walt Alston while a member of the Nashua club in the Dodgers chain. He steeled himself for the long and difficult rehab that was required after his accident and recovered enough use of his arms and shoulders that he was able to serve as a coach and consultant for the Dodgers for many years.

He is a member of the Baseball hall of Fame, the second black player (after Jackie Robinson) to be inducted. His New York Times obituary (Campy died in 1993) delves deeper into his life than I can here. Also available is his book, It's Good to be Alive which was made into a TV movie in 1974.  The official Roy Campanella website has lots of info and pictures as well.

The 1959 Topps card featured here is one of a handful of 'tribute' cards they have issued through the years.  In 1964 they included an 'In Memoriam' card of Ken Hubbs, the young Cubs second-baseman who had died in a plane crash the previous winter. They included a tribute to Cory Lidle in the 2006 update set and the back of Astro pitcher Jim Umbricht's 1964 card has a line of text on the back which mentions his death that spring.

My Campy #550 is one of the lesser condition cards in my set. I acquired it early in my quest to fill the set and I was unwilling to pay much for any individual card at that point. It has evidence of having been glued onto something and the card is creased and generally roughed up. But the 'coolness factor' is still evident. Campy sits in his wheelchair wearing a snappy cap and his well known smile. I smaller shot of him in his playing stance reminds us of what he was known for. Warren Giles penned the write-up which takes up the back of the card. I probably should upgrade this card but there is something fetching about the card knowing it was a treasured part of some kids collection who thought enough of it to paste it into a book of some sort. 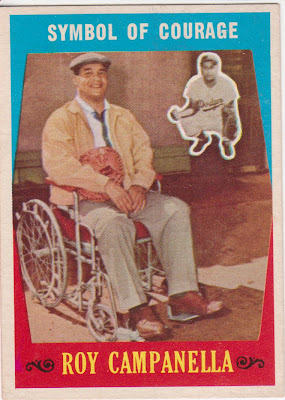 I scored an upgraded copy after I wrote this post and it arrived last Friday. It's in better condition. There is a flaw on the back (more paste?) but the front looks great and it's overall a nicer card. I'm happy with it. 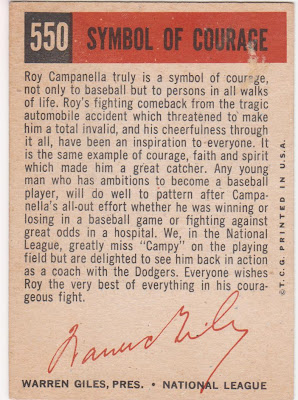 The Topps Vault had this in their archives. The original pic used for this card. I found it this morning and thought it would be cool to include here. 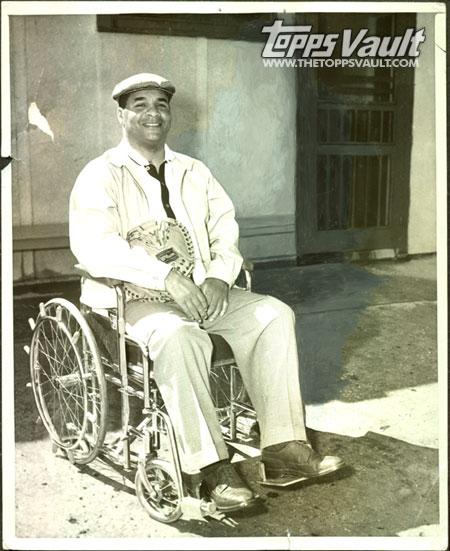 Posted by Commishbob at 8:11 AM