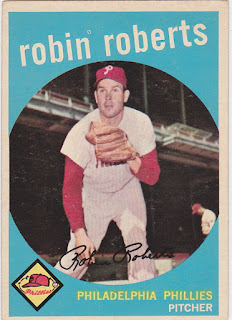 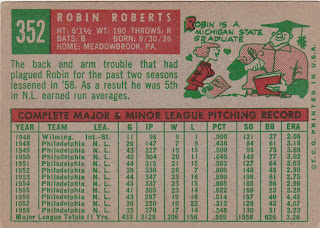 From 1950 through 1955 Robin Roberts was a truly dominant force in the National League. He won 138 games over that six year stretch, made the All Star game each season and finished in the top 7 of MVP balloting five times.

Not that he was slouch for the rest of his 19 year Hall of Fame career but on the mound during the first half of the decade he was damned impressive.

From his Baseball Reference Bullpen page:

After signing with the Phillies in 1948 Roberts pitched a very strong half season in Class B Wilmington before a call-up in June of that year. He had decent results but he didn't quite show any sign of what was to come. A 15-15 year in 1949 led to a 20 win season in 1950 as the 'Whiz Kids' made it to the World Series where they fell in four to the Yankees. Roberts pitched a 10 inning Game Two and lost a 2-1 decision to a Joe DiMaggio homer.

Roberts never made it back to the postseason but he did make it to Cooperstown after nearly two decades in baseball. After 14 years with the Phils Roberts had stints in Baltimore (four years), Houston and Chicago with the Cubs. He finished with 286 wins while pitching for some pretty sad teams.

After his final major league game in 1966 Roberts pitched for the Reading Phillies in 1967. He later coached for nearly a decade at the University of South Florida.

Little known Robin Roberts facts: He was sold to the Yankees for 1962 and was on their roster but didn't appear in a game before being released and signed by the Orioles in late May. He's the only pitcher to have beaten the Braves in Boston, Milwaukee and Atlanta. He had a traveling basketball troupe during the baseball off-seasons and frequently faced the Globetrotters. His hometown of Springfield, Illinois has a stadium named for him.

Roberts poses here in a shot taken at Connie Mack Stadium. Nice break from the Yankee Stadium shots that dominate this set.
Posted by Commishbob at 8:00 AM