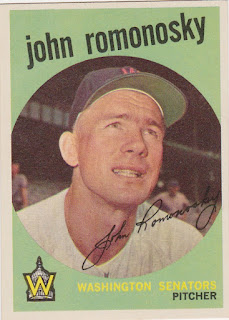 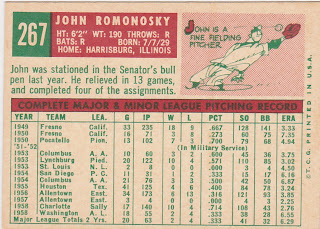 An Illinois native, the right-handed John Romonosky signed with the St. Louis Cardinals in 1949, pitched in thier chain for a couple of seasons and then spent two years in the service during the Korean Conflict. Returning to baseball he had a brief look at St. Louis when he made two starts in 1953.

After a couple of years back in the he emerged with the Senators and pitched briefly in 1958 and 1959 while bouncing back and forth between the Nats and their AA club. He went 3-4 in 30 games for the Sentors piling up just over 100 career innings.

Romonowski finished his career pitching in the minors in 1960 and 1961 in the Yankee, Twins and A's organizations. Following his retirement from baseball, he worked as a Franklin County, Illinois deputy sheriff for 34 years. He died in 2011.

Not a bad card actually. Nice corners and no defects. It's an upgrade over my first copy. Usual 'pose in front of the visitors' dugout at Yankee Stadium' card.
Posted by Commishbob at 7:50 AM