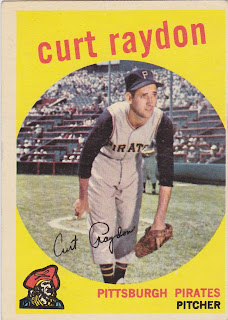 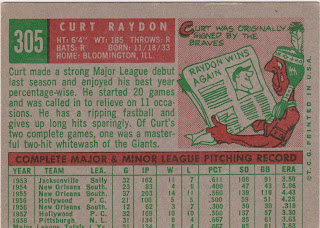 Curt Raydon had one year in the majors, 1958. It was a very promising season that saw him go 8-4 on 20 starts and post a tidy 3.62 ERA in 31 total appearances. But he never made it back to the bigs. Plagued by hand and shoulder injuries he had some good numbers in the Pirates system but never was able to make the club in the spring. Topps thought enough of him to put in on a 1960 card despite him spending '59 in the minors.

He became a police officer after he retired in 1962.

I believe (but I wouldn't swear to it) that this pic was taken in Seals Stadium in San Francisco. Color pics of the place are hard to find but I've seen some and I recall the red railings. Note the politically incorrect cartoon on the back and the note in the write up that mentions a two hit shutout he threw in '58.

Posted by Commishbob at 8:17 AM