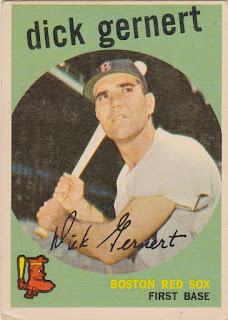 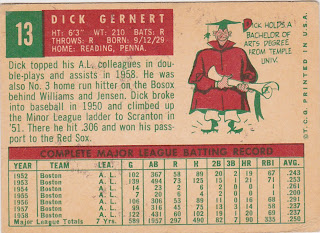 A short digression here before we look at Dick Gernert. The Venn diagram below represents my baseball awareness. The blue circle in the middle is my 'Awareness Sweetspot" and it runs from about 1958 to 1994. The red circle represents players from this 1959 set who's best years were played in the early to mid fifties and of whom I was for the most part unaware of (or at least unaware of their talents). Gernert, Mickey Vernon and Andy Pafko all in this circle.The green circle represents guys who played the majority of their career after the 1994 strike/lockout and of whom my familiarity is confined to having heard their names at best but not knowing much about them.

Off the top of my head I'd include Derek Lowe, Nomar Garciaparra, and Pat Burrell as guys I see on cards and can't really identify with. Chipper Jones is in the latter circle as well. When I heard he was getting the 'Farewell Tour' treatment I went and educated myself on him and his career. Heck of a ballplayer.

Anyway, back to Dick Gernert. The Pennsylvania native played basketball at Temple University before signing with the Red Sox in 1950. He debuted in Boston in 1952 and he hit 40 homers in his first two seasons. He played primarily in the minors for the next two years before he re-established himself on the Boston scene in 1956. From then through the end of the decade he shared first base duties with Vic wertz, Pete Runnels and others.

He played his last few seasons with the Cubs, Tigers, Reds and finally the Colt 45s. He hit more tahn 100 homers in the majors and finished with a .254 average. Once he retired he served as a coach, scout and minor league manager for many years. He looks a lot like Ed Kranepool I think. 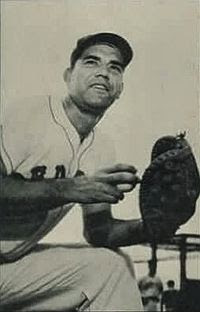 Maybe it's just me.
Posted by Commishbob at 7:00 AM