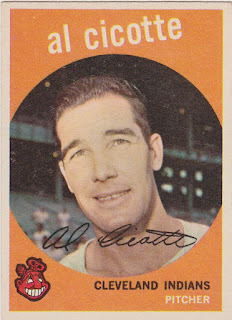 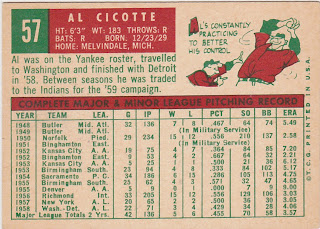 Al Cicotte (he pronounced it 'SEA-kott' was the great-nephew of Eddie Cicotte (he pronounced it cy-KOTTY) of Chicago Black Sox fame (shame?). Was Al trying to distance himself from his great-uncle? If so he wasn't shy about speaking about their relationship in the March 1953 interview that ran in the Sporting News. Al Cicotte was a Yankee farmhand at the time, fresh off four years of combining minor league baseball and a couple of service stints.

Cicotte continued to bang around the Yankee chain before finally getting a shot in 1957 when he went 2-2 in 20 games for the Bombers. He was sold to the Senators and pitched for them and the Tigers in 1958. Dealt to the Indians Cicotte spent the 1959 season in Cleveland, 1960 in the Indians' minor league chain (he piitched an 11 inning no-hitter that year for Toronto), 1961 with the Cardinals and 1962 with the Colt 45s and the Houston minor league club in Oklahoma City.

He retired with a 10-13 record in just over 100 games. He died twenty years later in 1982. I was going to make a snarky comment about the cartoon on the back of this card but I read the '53 interview and saw that Al's uncle Eddie was the one who urged him to constantly work on his control.

Al Cicotte was known as 'Bozo'. I haven't figured out why.
Posted by Commishbob at 7:03 AM