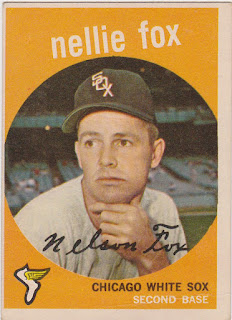 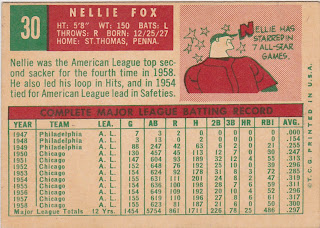 In October of 1949 Nellie Fox was traded by the Philadelphia A's to the Chicago White Sox for catcher Joe Tipton. I'm sure Tipton was a nice enough guy so I won't disparage his career. After all, the closest I've ever come to the big leagues was buying a ticket for a box seat. But when you look at his numbers and then look at Nellie Fox' numbers you realize that someone deserved to lose a job when they OK'd that deal.


His 1959 World Series with the Sox was his only taste of the post season but he made the most of it going 9 for 24. Pretty darn impressive credentials. So impressive that I can't help but wonder why his Hall of Fame admission took so long to come to pass. Fox defined 'hustle' and scrappiness' before Pete Rose came along to turn those attributes into a cottage industry. He was tough to strike out. Whitey Ford claimed he only fanned Fox once and that was because of an ump's bad call. Fox finished his career with a season and a bit more in Houston as a member of the Colt 45s/Astros.

Fox coached for the Astros and Rangers after his playing days. Supposedly his tobacco chewing habit caused a problem in the Astrodome. Judge Roy Hofheinz, owner of the Astros and builder of the Dome didn't like tobacco juice stains on his 'rug' and sent down word to Fox in the dugout one day that he should quit spitting on the turf.

Fox certainly looks thoughtful on his '59 Topps card. It's a different pose for sure and makes this card stand out. Nellie Fox died of cancer at the age of 47 in 1975.

I found this video of the 1959 White Sox highlights while googling Fox. Pretty neat.

Posted by Commishbob at 5:32 AM