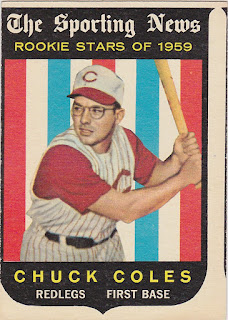 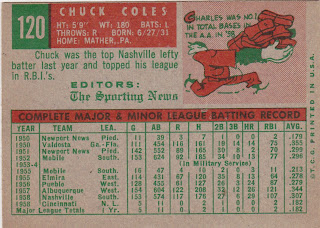 Chuck Coles' major league career was over by the time this card was issued in 1959. A Pennsylvania schoolboy star, Coles was signee of the Brooklyn Dodgers in 1950 and when he made his pro debut with Valdosta that year he won the Gulf-Florida League batting title and was the All Star Game MVP. Coles was dealt to the Reds organization in 1958. After his long career in the minors during which he put up some good hitting numbers Coles made his major league debut late in September of '58.

He played in five games driving in a pair of runs. He never made it back to the bigs. He played in the minors in the Reds' and Twins' chains before hanging up his spikes after the 1963 season.

Coles went back to his hometown of Jefferson, Pa. and worked as a millwright. He died in 1996 at the age of 64.

This is one of the most mis-cut cards I have among my '59s. I've seen a lot of mis-cut Rookie Star cards from this set.

Posted by Commishbob at 7:22 AM