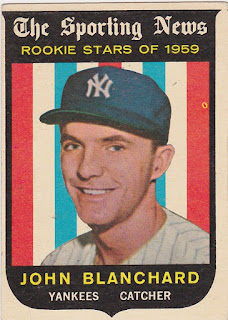 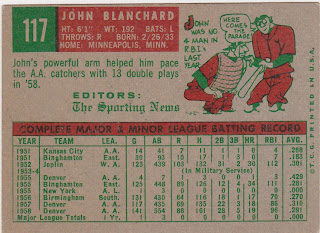 The Yankees signed 3-sport schoolboy star Johnny Blanchard out of Minneapolis in 1951 and he proceeded to take a rather long road to the majors. He moved up through the Yankee chain, took a couple of years off to serve in Korea, got a one game trial in 1955 and finally landed with the Bronx for good in 1959.

He had been a third baseman (and basketball star, good enough to get a pro offer) in high school but the Yanks converted him into a catcher and he spent his career alternating between that and playing the outfield with some first base work thrown in.

Blanchard was never an every day player but he did play an important role for New York as a platoon option and a strong bat off the bench. He appeared in five World Series with the Yanks and won a couple of rings. He batted .345 in his Series at bats and belted two homers in the 1961 Series. That year was also his best in the majors as he hit .305 with 21 homers in only 243 at bats,

He was behind the plate when Bill Mazeroski homered to end the 1960 Series and talks about his role and that fateful game in this SABR article. In Blanchard's final season, 1965, he played for the Yanks, Athletics and Braves.

Blanchard somehow makes this rookie card look less wonky than most in this subset. I always think of him as 'Big' Johnny Blanchard because that's how I recall the Yankee broadcasters referring to him. But he wasn't a particularly big guy.
Posted by Commishbob at 7:30 AM