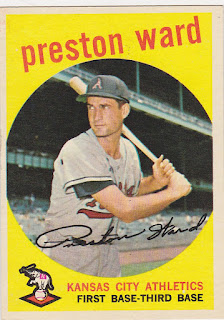 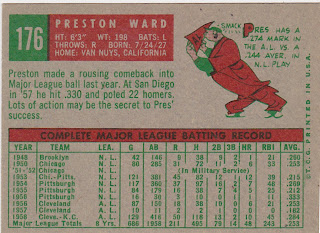 Handy but light hitting Preston Ward was signed by the Brooklyn Dodgers in 1944 and climbed through their loaded minor league system before getting a shot with them in 1948. He hit a respectable .260 in 62 games but was back in the minors the following year and then sold to the Cubs.

He was a semi-regular with Chicago in 1950 but his baseball career was put on hold with a military stint in '51/'52. When he returned the Cubs dealt him to the Pirates and, after a few years as a platoon 1B/outfielder he moved on to the Indians in '56 and Athletics in 1958. His numbers in 1958 reflect his best season as he hit .281 with 10 homers in 400+ at bats splitting tine between the Indians and A's. 1959 was his last shot in the majors.

Ward was another of the many ballplayers in the '59 set that left a basketball career in the dust to sign a major league contract. Ward was a captain and All-Conference selection at Missouri State in the late 40s.
Posted by Commishbob at 6:30 AM