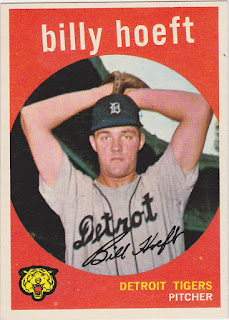 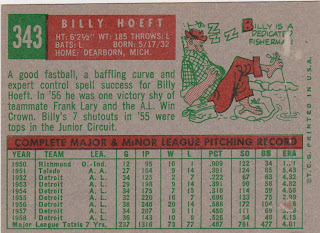 I tend to think of Billy Hoeft as an Oriole since his years with the Orioles' reliever and spot starter came right in the sweet spot of my early and ardent years as a Bird fan. But Hoeft's best days came as a starter with the Tigers in the mid-fifties.

Hoeft had a resurgence of sorts with the O's as his ERA for them in parts of four seasons was lower than he put up for any other club. From the Orioles Hoeft went on to pitch for the Giants, Braves, Cubs and Giants again.

Billy Hoeft trivia from Wikipedia:
On September 7, 1953, Hoeft struck out three batters on nine pitches in the seventh inning of a 6–2 win over the White Sox and became the fourth American League pitcher and the ninth pitcher in Major League history to accomplish the nine-strike/three-strikeout half-inning.


On June 24, 1955, Hoeft surrendered the first home run in the career of Harmon Killebrew.
He had a reputation of being a really good signer thru the mail in retirement. I have a signed '62 Hoeft. I wish it was a '61. Same picture, better set.
Standard pose with the card picture taken in Yankee Stadium. Not much to say about it except there's some paper loss on the back but the front is just fine.
Posted by Commishbob at 4:23 AM